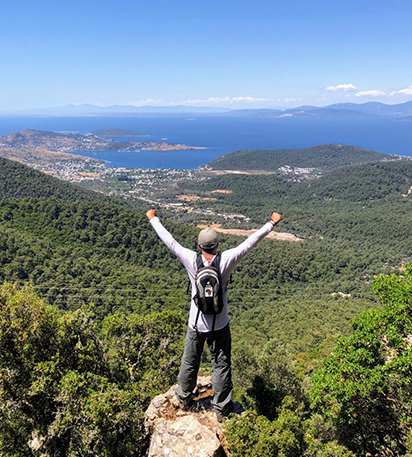 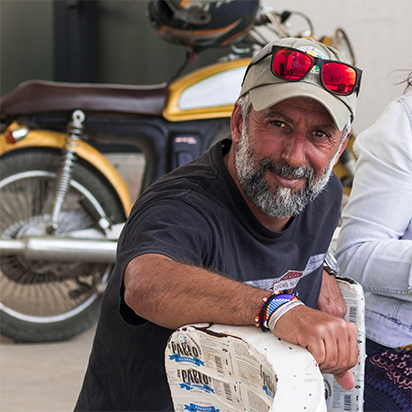 Deniz Kılıc was born in the spring of 1971 in İzmir city but he calls himself from Karsiyaka, literally the ‘other side’ neighborhood.

His first outdoors and camping adventures started with the boyscouts of Buca Hasanaga Bahcesi, he was named among the first “national boyscouts” to be sent to England.

He played football (i.e. soccer) with the nickname of “scorer” in the Karsiyaka Gazi Highschool.

He became a licensed motorcycle racer in the Karsiyaka Sports Club. He raced in the Turkish Motorcross and Enduro Championships.

Beginning of the 90’s while studying at the Middleeastern Technical University Psychology Department, he was a member of the Atletics team running 400m tracks races.

He actively partook various roles in the organization of the university spring festivals and book fairs.

He also developed his mounteineering skills and knowledge in the university community. He carried the university aid to the grief stricken Erzincan area after the disastrous earthquake hit the city.

In the summer months of his uni years, he also had a different hands on experience working as a bartender in papparazzi, back then the best coctail bar of Turkey on Cesme Beach.

As he jumped at every opportunity to join extracurricular activities (some say he also played King, a card hame, till the morning many a school night!) he was kicked out of college.

He then began to study Professional Tour Guiding in the Aegean University Deaprtment of Touristic Studies. Though with difficulty, he did manage to graduate this time.

He settled in Bodrum. He ran the local operations of a tour agency and took guests around Bodrum’s mountains by 4WD for over 5 years.

He traveled around Anatolia for weeks with his guests. Sometimes walked the pathways, sometimes cycled all the way from Antalya to Bodrum. He cannoed in its bays and coves.

The most famous of his guests was Paul Salopek, a journalist- author with 2 Pulitzer awards. He walked over Turkish landscape for two months with him as part of his “Out of Eden Project”. This journey took its place on the pages of National Geographic magazine.

One of the photographs Deniz took during this journey adorns the article of Paul Salopek in National Geographic. The same photograph is used in an inteerview with Paul on Frankfurter Algemayne newspaper.

In the same period, he guided the National Geographic editör in Gobeklitepe.

Whenever he had time off from guiding, he started to travel around in neighboring countries. His first journey in 2005 was to Syria, Lebanon and Jordan. Later he toured around extensively in Iran for a month by motorbike.

He competed in the World Air-Ballooning Championship in Hungary on behalf of Turkey with Turkey’s most talented pilot İsmail Keremoglu. He traveled to Hungary by his motorbike on this occasion.

His motorcycling adventures began to increase. For fun, he traveled by motorbike all the way to Cape Town from Bodrum, Africa’s southern most point in 107 days and to Dakar from Bodrum in 60 days. He croddes through the Sahara Desert twice. He was on the cover of a motorcycle magazine on a story about his journeys.

He guided several motorcycle tours to Russia, Georgia, Armenia and Azerbaijan with American and Turkish tourists.

He also organised a few private motorcycling tours to the Balkans and Eastern Europe.

Within the“#visitluxemburg” campaign events to promote Luxemburg, he guided world famous motorcyclists and media members in Europe on his motobike.

In 2018, with the sponsorship of a travel agency he organised the most comprehensive “Travellers Summit” of Turkey with 52 travellers joining as participants.

In over 20 years as a guide and as an ardent traveller himself, the number of countries he has been to has approached 90.

Deniz, who loves to give new life to old motorcycles in the free time he finds, now lives in Bodrum. He is married with two kids.

WHY US WHY US